Earlier this summer, the K2 Intelligence study for the ANA asserted that media trading incentives exist in the U.S. market, suggested they are ‘pervasive’, and identified elements of systemic behavior. Such incentives were shown to be an integral feature of the U.S. media market.

Although these findings are nominally about disclosure, the rebate issue goes much deeper than what agencies have and – more to the point – have not been sharing with their clients. They reflect a crisis of confidence, a lack of transparency, and a breakdown in trust between advertisers and agencies. What’s more, these practices go beyond the shores of the U.S. This is a truly global issue.

Restoring trusting client/agency relationships is critical for the long-term health and wellbeing of advertising, particularly when so many transactions rely on digital, programmatic, and complex chains of adtech vendors, all with a role to play in successful advertising. The report Ebiquity and FirmDecisions produced for the ANA is intended to help advertisers reassert their primacy in their relationships with their agencies, but in a transparent environment. The recommendations are a practical suite of initiatives designed to make client/agency partnerships fit for the digital media age.

In the eight weeks since the report was published, we’ve talked to advertisers around the world to help them address the issues raised by the ANA’s initiative. The study and our actionable recommendations have given us a platform to engage with advertisers on these issues, often for the first time. We have embarked on a program designed first to raise awareness and then to stimulate action, emphasizing the corporate governance agenda, involving a variety of client stakeholders – including marketing, purchasing, and finance; the CMO, CPO and CFO; elevating corporate oversight from operations to the C-suite.

Our program has so far involved seminars and webinars, in the U.S., the U.K., and Europe. We’ve held individual client briefings, meetings hosted by industry associations including ISBA and the WFA. There’s a link to one of a series of webinars we held for WFA members on YouTube, here.

Last week, this program moved up a gear. We held a series of briefing and discussion seminars for groups of senior advertisers at our global HQ in London. The issues raised were of interest and concern to a broad cross section of advertisers, and we welcomed delegates from business categories as diverse as FMCG, pharma, financial services, media, retail, and utilities.

The seminars provided advertisers with a forum to learn, to discuss the issues, and to share concerns. At the sessions, client reactions to the K2 Study and Ebiquity and FirmDecisions’  recommendations have been uniformly positive, welcoming the opportunity to address issues that have lacked public debate. Some of the comments we heard are shown below.

“This is a wake-up call for the whole industry. And I don’t just mean media agencies and their affiliates. This is relevant for everyone, and that includes advertisers. If we want a fair and equitable – and above all transparent – industry, it’s up to us to stand up, get involved, become more knowledgeable, and create better – and improve existing – partnerships.”

“I always assumed that agencies operated in our best interests. To find out that this may not be the case is a real eye-opener.”

“If it wasn’t for our investment in advertising, no link in the media industry chain would exist. It’s about time agencies refocused their obligations from their owners to their clients who fund their companies completely.”

“It was a shock to learn that many agencies operate on the basis that ‘it doesn’t say we can’t do this, that, or the other in the contract – and so we will.’ That’s really got to change.”

“If only 20 percent of digital spend buys actual inventory, that’s like buying 100 GRPs on TV but getting only 20, which we’d never stand for. Digital needs to change, and some of the big players in FMCG are already diverting spend away. I’m not surprised.”

“It can be hard, client-side, to get the board to pay attention to media spend. Tackling these problems is going to take time and stamina.”

More than anything else, we have seen determination and resolve to do something about the issues. Our prescriptions for change place responsibilities on all participants in the media chain – from media agencies to advertisers, from the CMO to the CFO, covering diverse issues which span everything from contract governance and audit rights to data ownership and control over media technology. These recommendations go well beyond financial transparency to cover the ways in which media strategy and planning should be conducted impartially using the best available research and data, and without conflicts of interest which arise from media trading incentives and principal trading.

For too long, the media industry has labored under a cloud of mistrust and suspicion.

The roadmap for a different, more transparent media industry of the future is being openly discussed, and it’s a future in which advertisers and their agencies both prosper in partnership. 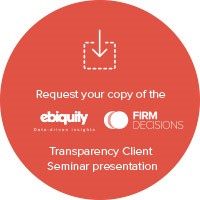 For marketers in search of growth, China is calling