The U.S. Association of National Advertisers (ANA) released their full media transparency study, looking directly at the issue of transparency in the U.S. advertising industry.

The study is to demystify the landscape and provide a clarifying perspective on the state of transparency and on non-transparent behaviors in the market. The study is also intended to develop practical solutions and best practice behaviors that can move the industry forward.

As marketing experts and contract compliance specialists, Ebiquity and FirmDecisions were commissioned to... identify the potential implications for advertisers of the findings contained in K2 Intelligence's study. Our work focuses on contract provisions and principles, and provides best practice advice for advertisers to help them to develop practical solutions.

Ebiquity and FirmDecisions did not participate in the interviews that formed the foundation of the assessment and, like the ANA, are unaware of which specific companies and individuals were interviewed. 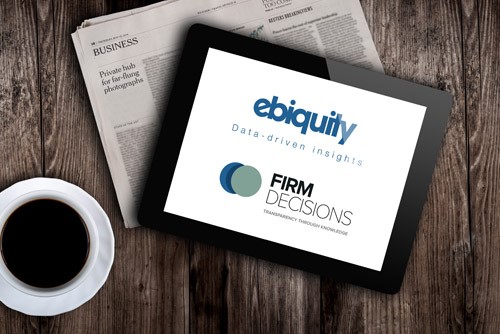 New York, June 7, 2016 - Numerous non-transparent business practices, including cash rebates to media agencies, were found in a sample of the U.S. media ad buying ecosystem, according to a study commissioned by the ANA (Association of National Advertisers).

New York, July 18, 2016 - Marketers should require media agencies to be fully transparent to elevate trust and restore confidence in the client/agency partnership, according to a wide-ranging set of recommendations released today by the ANA (Association of National Advertisers) and Ebiquity/FirmDecisions.

The media landscape in the Netherlands is evolving quickly into a digital-first ecosystem. Ruben-Schreurs, argues that transparency has never been more important - or more necessary.

Article: The key to accountability and transparency in online advertising control

Over recent years, it is clear that trust between media agencies and advertisers has eroded. Across the world, the onward march of programmatic buying and decreased transparency have done nothing to help.

In this interview, after reflecting on the observation that agency fees have been coming down while their profits have been going up, David talks about the way in which agency groups have created new revenue streams via new divisions or services that are separately contracted.

Paper: Accountability and transparency in media today: An Ebiquity guide