Why it pays to be a stuck record

“Each generation thinks it invented sex; each generation is totally mistaken. Anything along that line today was commonplace both in Pompeii and in Victorian England; the differences lie only in the degree of cover-up – if any.”

So said the American novelist and screenwriter, Robert Heinlein.

While on the subject of cover-ups (if any), it may surprise you to learn that the same can be said of transparency in media and marketing. This is particularly true when it comes to the volatile and ever-changing world of digital.

Each new generation of consultants thinks they’ve uncovered more dirty linen in the media industry and can point to new and ingenious ways in which those selling media inventory are able to trade beyond the gaze of their clients’ eyes. And while it’s true that new media channels, new trading models, and new technologies do provide more opportunities for value to leak at each step of the transactional chain between brands and publishers, it’s important to remember that this really is nothing new. The methods may have changed, but practices haven’t changed that much.

When we founded FirmDecisions in 2000 we didn’t really consider the longevity of our business. We simply concentrated on highlighting a number of issues across many media agency groups which needed addressing. For example, unbilled media – media space that is not invoiced by the publisher – was common; agencies often treated the money from unbilled media as their ‘bonus pot’; and, cash flow represented a significant revenue stream for agencies, because high interest rates generated cash.

Yet we genuinely believed that, having drawn advertisers’ attention to the issues that needed resolving, resolved they would be. Transparency would be returned to media buying, and our long-term value would come from ensuring compliance to what agencies and advertisers agreed between themselves. We’d be honored – fêted – by the industry, but more than likely twiddling our thumbs and wondering what to do next.

How wrong we were. As media trading has become increasingly complex over the past 15 years, driven by the advent and then the explosion of digital marketing, the need for someone – anyone – to say the same things again and again and keep the spotlight shining on transparency has only grown stronger. Each new link in the chain has added complexity to the trading model; each innovation has reinforced the need for further pressure to deliver transparency and accountability.

Digital grew to have a lack of transparency built into it for the same reasons Out Of Home had decades before. Unlike traditional mass media (TV and press), digital had no rules or traditions. So, when the adtech and martech industries added complexity to digital media trading through Agency Trading Desks, ad servers, Demand-side Platforms and Supply-side Platforms; when digital skyrocketed to become – for many advertisers – the biggest single line of A&P expenditure, it grew too quickly and with insufficient checks and balances. To this day, repeated research shows that digital performs very poorly in terms of ROI compared to traditional media channels – particularly the ace in the pack, TV. And yet it continues to enjoy a meteoric rise up clients’ spending ladder, unabated. We always have to ask “Why???”

When the K2 Intelligence study for the U.S. Association of National Advertisers (ANA) was published last June, many advertisers expressed genuine surprise that the study revealed evidence for the first time that non-transparent practices are pervasive in the U.S. market. We co-wrote a follow-up report for the ANA with our colleagues from Ebiquity. This allowed us to lay out the definitive blueprint of practical solutions and best practice behaviors advertisers should adopt to make better decisions on how they choose to structure their relationships with their media agency partners. And on how to implement those decisions.

The report was called Media Transparency: Prescriptions, Principles, and Processes for Advertisers. It set out the seven most important areas where – our long experience suggested – advertisers should act to make the global advertising market more transparent: from contract content, through audit rights and governance, to data and technology. It was the first time that we had contributed to such a comprehensive and public set of recommendations on transparency. But it very definitely wasn’t the first time we’d made the recommendations. We’ve been talking about these issues for years.

The ANA’s transparency initiative has served as a wake-up call to the industry. Addressing the annual leadership meeting of the Internet Advertising Bureau (IAB) at the end of January this year, P&G’s chief brand officer Marc Pritchard declared[1] the digital marketing ecosystem to be “murky at best, and fraudulent at worst”. Six weeks or so before, Coke’s CMO Marcos de Quinto announced[2] the company was questioning and rethinking its approach to digital.

Far from being a flash in the pan, sorting out a one-off problem and moving on, FirmDecisions has become an important part of the contract compliance infrastructure. In the past 16 years, we’ve undertaken more than 5,000 contract compliance reviews for more than 100 leading advertisers. We’ve gone from one to nine offices, today covering more than 70 markets.

We’ve done this by saying the same things over and over again, but always with one eye on the future. Our clients want to ensure that their commercial best interests are served by their contracts with their media agencies, and we help each client to achieve in its contract that level of transparency that client requires.

Similarly, we assist clients who wish to review and update their contracts regularly in light of the increasingly digital advertising ecosystem. It is for clients to set the contractual scope and remit by which they choose to audit their media agencies, including how far down the transactional chain they wish to be able to follow the money. What we do is guide our clients on how to turn their intentions into contractual reality.

There’s no need and no place for a lack of transparency in media trading. The ANA study and report have focused global attention on the transparency and made discussion about the issue mainstream. And while we wish it hadn’t been necessary for us to be so repetitious, we truly do believe it sometimes does pay to be a stuck record. 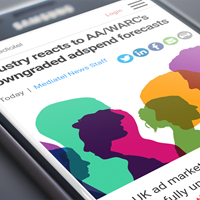